This whipped cream cheesecake is fancy enough to use for holidays like Christmas or Valentine’s Day, but quick and easy enough that you can make it any time of the year! It’s a no bake favorite!

Did you see this post on my Facebook page? I announced my new found obsession with pomegranates, and I have to say that the beautiful jewels inside of the flesh are quickly becoming one of my favorite fruits.  They’re sweet, crunchy, and packed with nutrients!

Sadly, I can’t find healthy looking poms in northeastern Wisconsin very often, so I’m grateful for the companies that have decided to take on the fussy work of selecting ripe ones and removing the arils from the flesh for me. I was introduced to a couple of those companies during the Fresh Summit conference, and the generous samples that I was given to bring home with me are just about devoured now.  I love that they’re being marketed as a healthy snack for kids, too. The cute, portable containers they come in have spoons under the lid so they’re ready to eat anytime. 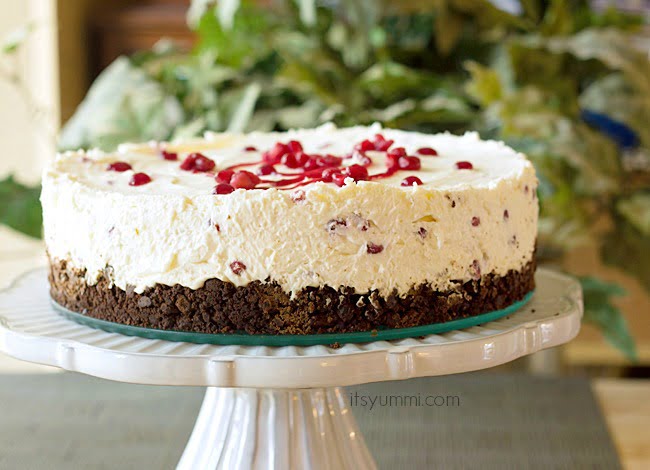 So, m’loves… about this cheesecake.  It’s a no-bake variety. That’ll score points with some of you, especially if you’re of the time-crunched variety.  Here’s the thing, though. When it comes to cheesecake, I rarely make no-bakes. I have this incredibly delicious (and somewhat top secret) recipe that was given to me by a friend a couple of years ago. A close version of it was used to make my Berry Lemon Cheesecake. 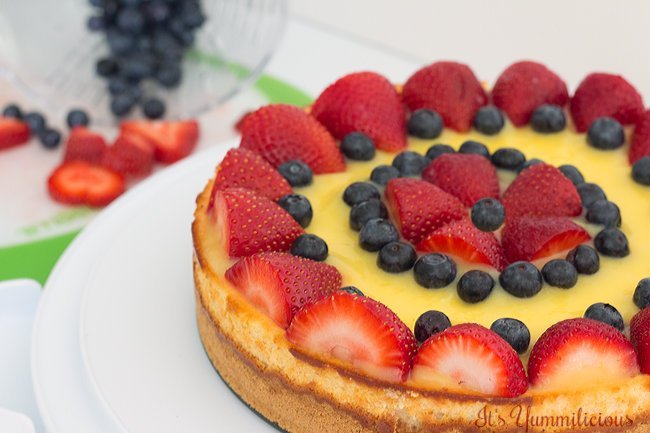 When you have a fabulous recipe that tastes incredible and bakes up well, how often do you not want to make it?  In my case, I didn’t want to make it because I was out of eggs.  Or I might have been lazy.  Maybe both.  ANYhoooo…

Finding a no-bake cheesecake recipe to use wasn’t an a problem. There are variations all over the Internet. I adapted one that I found here.  The issue for me, the ridiculously poor “no-bake” baker, was following the directions to make it properly.

See how beautifully tall and airy looking the whipped cream cheesecake is?  Well, how do I say this?  To be blunt, it’s supposed to be a dense cheesecake.  The reason it’s not is because I’m (say it with me) a ridiculously awful “no-bake” baker!  I decided not to read the directions all the way through before starting the project. That’s one of the worst mistakes ever! Always read the instructions, gang. Always.

I sort of skimmed over the part where it told me to mix the cream cheese, sugar, and vanilla until fluffy.  I did that… but I also included the heavy whipping cream that the recipe called forlater in the directions.  The heavy whipping cream that I added was supposed to be WHIPPED first and then folded into the rest of the ingredients.  Yours truly, Ms. Doofus, combined it without whipping, leading to a very liquidy batter.  One that would never have set up properly on its own in the fridge.  So after I realized the error, I put on my culinary thinking cap and tried not to bawl my eyes out at the thought of chucking eight bucks worth of ingredients down the drain.

I determined that the only solution to a wet batter was to thicken it somehow.  Corn starch would not work in this case.  Corn starch cake is not something that sounds yummi to me.  I suppose I could have added more gelatin, but I didn’t want to end up with pudding.  I just need to get rid of a little bit of the liquid.  So, I took an additional cup of heavy whipping cream and whipped it up like I should have done in the first place!  Then I folded that whipped cream into the liquid-y batter.  TA-DA!  It thickened right up…. but there wasn’t enough room in my 9-inch springform pan for all of the batter.  I decided that was fair, considering the extra volume I had created. I ended up with about a half cup or so of extra batter, so I filled up a couple of  small ramekins with it for a single serving treat.

The above mentioned recipe development is called culinary improvisation. Cooking entertainment, stand-up comedian style, if you will.  I’ve determined that I’m pretty freaking good at it!  🙂 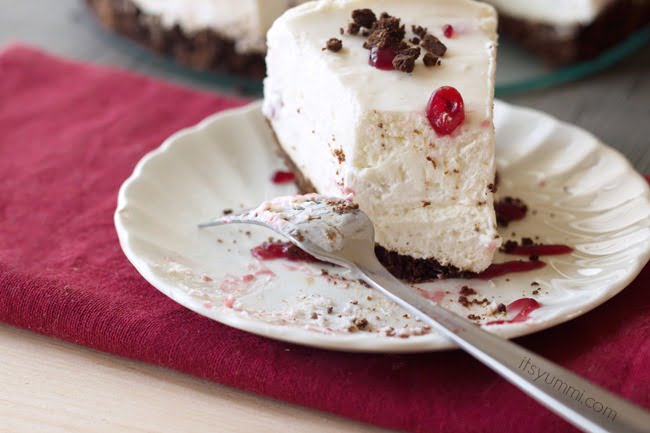 IMPORTANT NOTE:  The recipe shown below is based on you NOT recreating my mistakes!  While my whipped cream cheesecake did taste delicious, it was very light and airy. It tasted more like cream cheese flavored whipped cream than a true cheesecake.  It would be the PERFECT consistency for a layered parfait dessert, though.

Follow the directions below and whip the heavy cream before mixing it into the rest of the ingredients and you’ll have a delicious, traditional no-bake cheesecake.  If you truly want to try the whipped cream cheesecake exactly as mine turned out, you’ll need 2 cups of heavy whipping cream.  One cup will get added as is, and the second cup will get whipped and added right before pouring the mixture into the pan.

I hope you love this no bake whipped cream cheesecake! 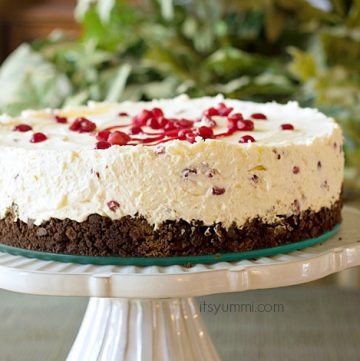 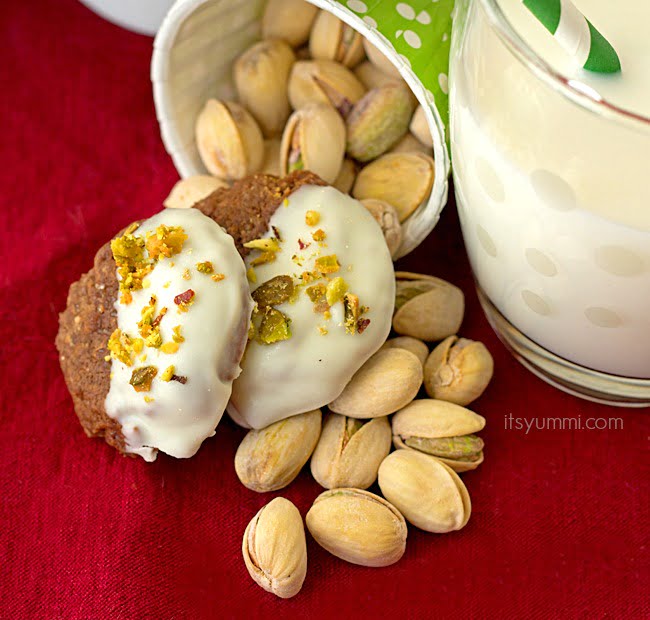 Double Chocolate Pistachio Cookies – sweet and salty chocolate cookies dipped into white chocolate, then sprinkled with chopped pistachios. Can you say yummi goodness? WHAT DO YOU GET WHEN YOU PAIR: Healthy, delicious in the shell pistachios + low carb double chocolate pistachio cookies + sugar-free vanilla almond milk? A NUTTY GOOD TIME and a… 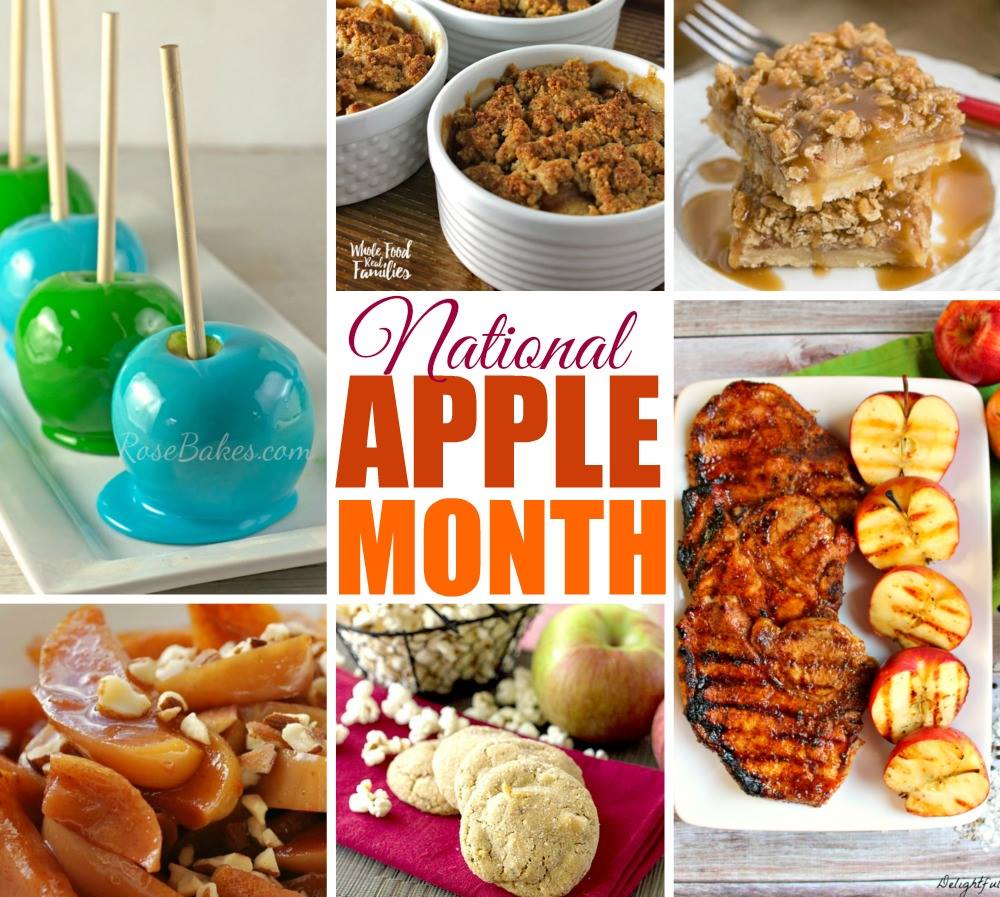 Fall’s best apple recipes are here, in celebration of National Apple Month!
Apple picking season is here, and I couldn’t be any happier about it. I’m serious, you guys. Fall in Wisconsin is my favorite time of the year. I look forward to cooking and baking all of the apple and pumpkin recipes I can.
October is National Apple Month, so there’s really no better time to start baking up the apple goodness.
Click here to get all of fall’s best apple recipes 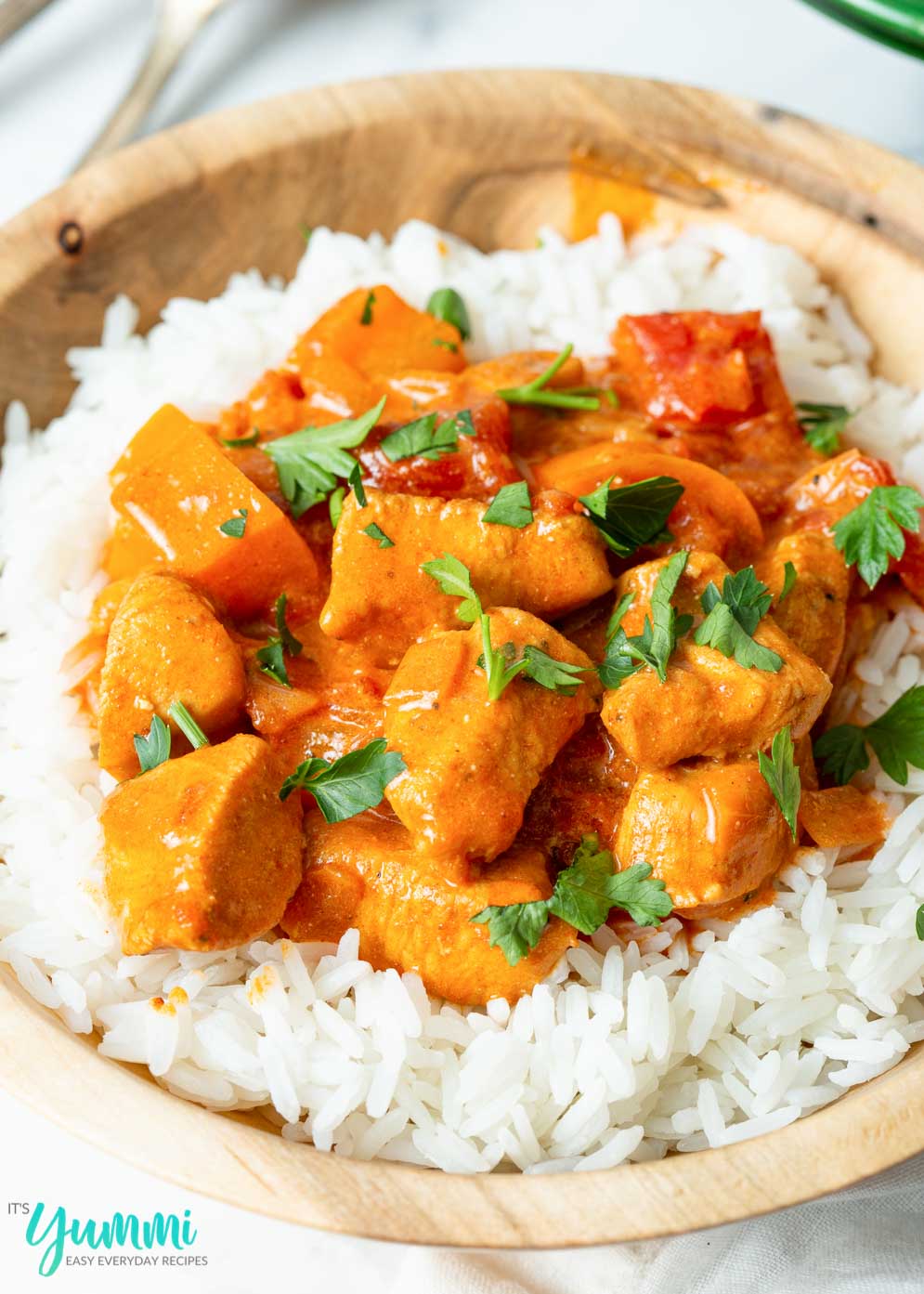 This rich and creamy chicken paprikash recipe is a healthier take of the beloved Hungarian dish. This take on the dish still has all the flavors you love in the classic.  I’m not exactly sure why, but I’ve had a massive craving for paprika lately. I want to put it in everything. Luckily with chicken… 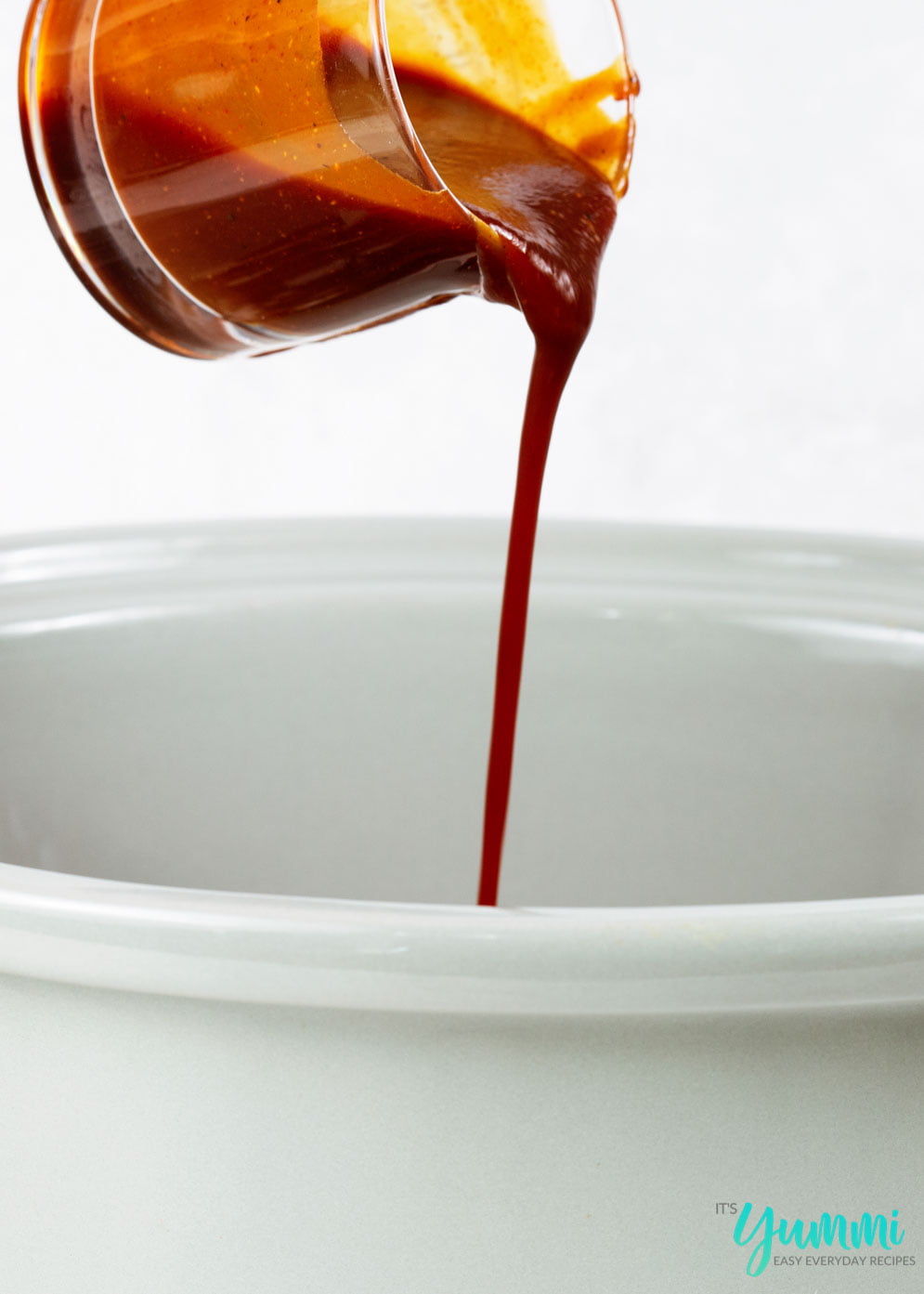 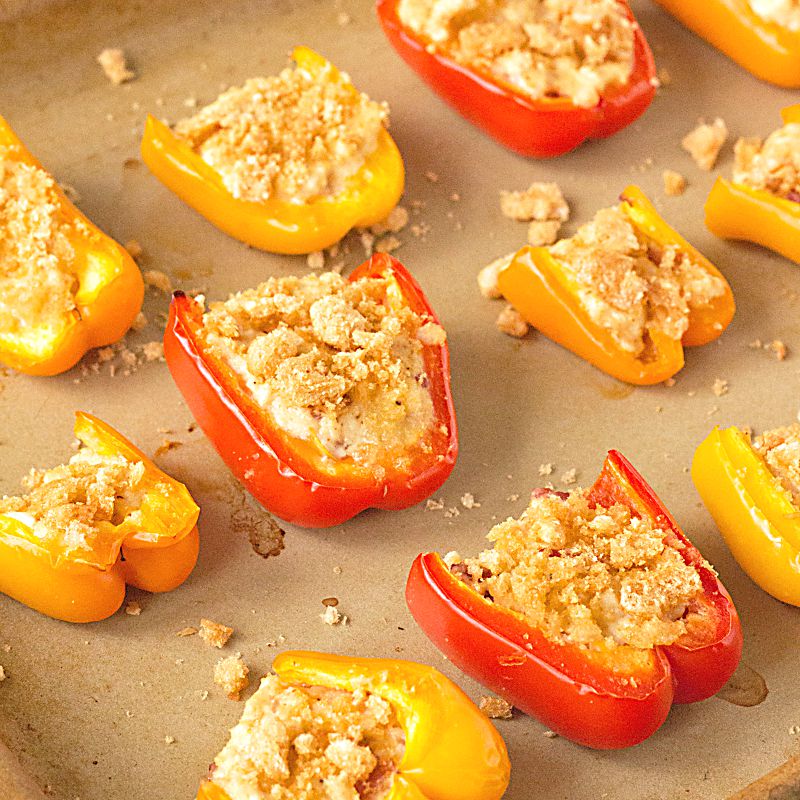 These cheesy crab bites are one of those gluten free, low carb appetizers that you’ll need to make a triple batch of. Sweet bell peppers are filled with cream cheese, bacon, and crab, then topped with crispy pork rinds and baked until golden and bubbly. Perfect for game day snacks, too! 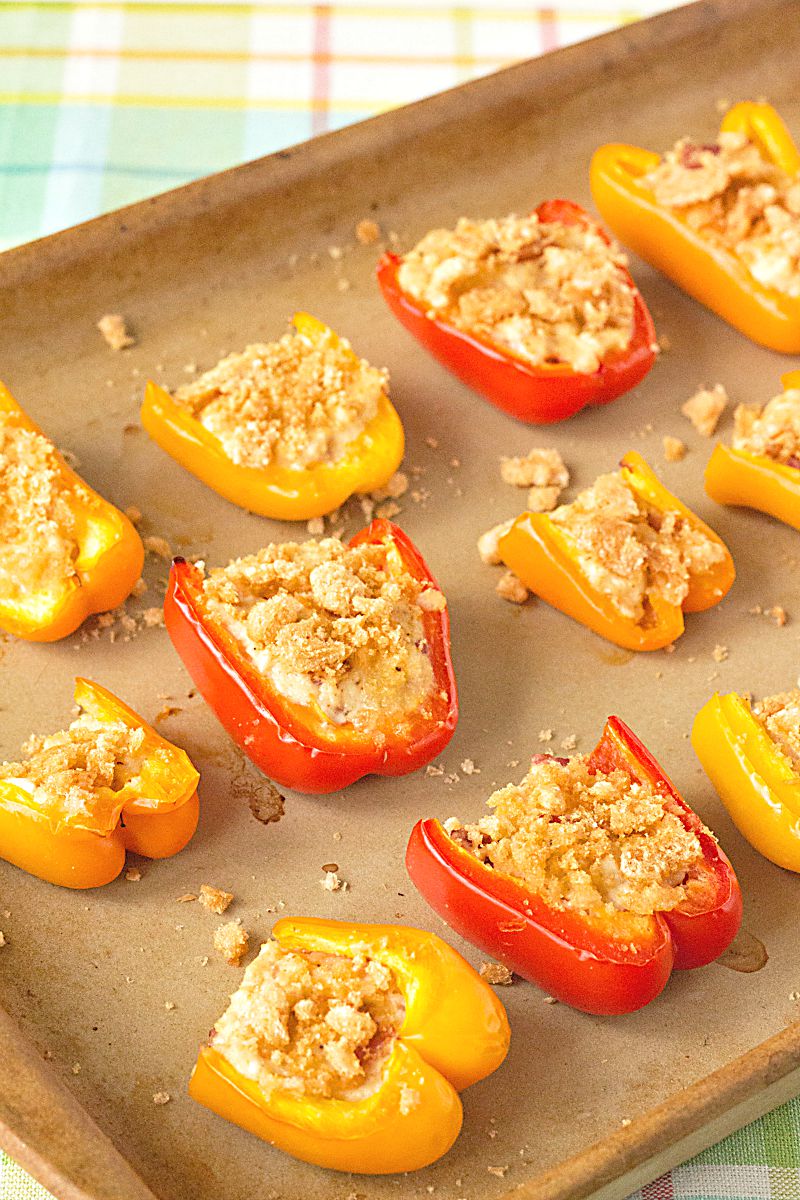 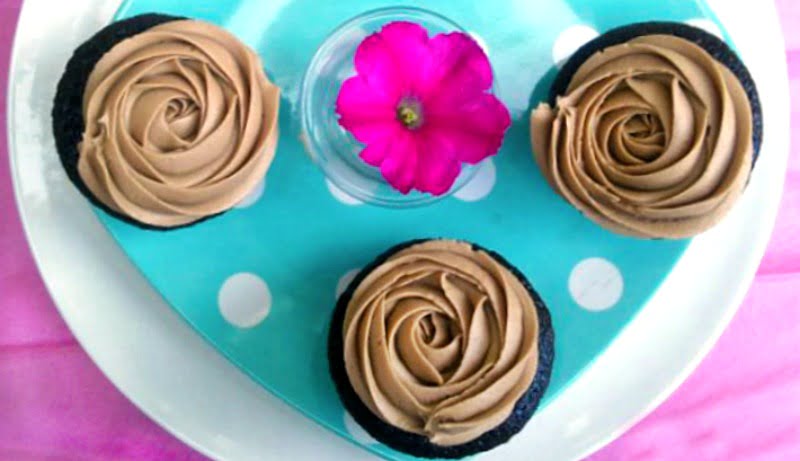 Vegan chocolate cupcakes as pretty as this chocolate banana variety should be enough to entice even true blue meat eaters to try them. They’re moist and delicious, with a creamy chocolate frosting that will put a smile onto your face. Even for the carnivores in the bunch, vegan cooking and baking has taken on a…