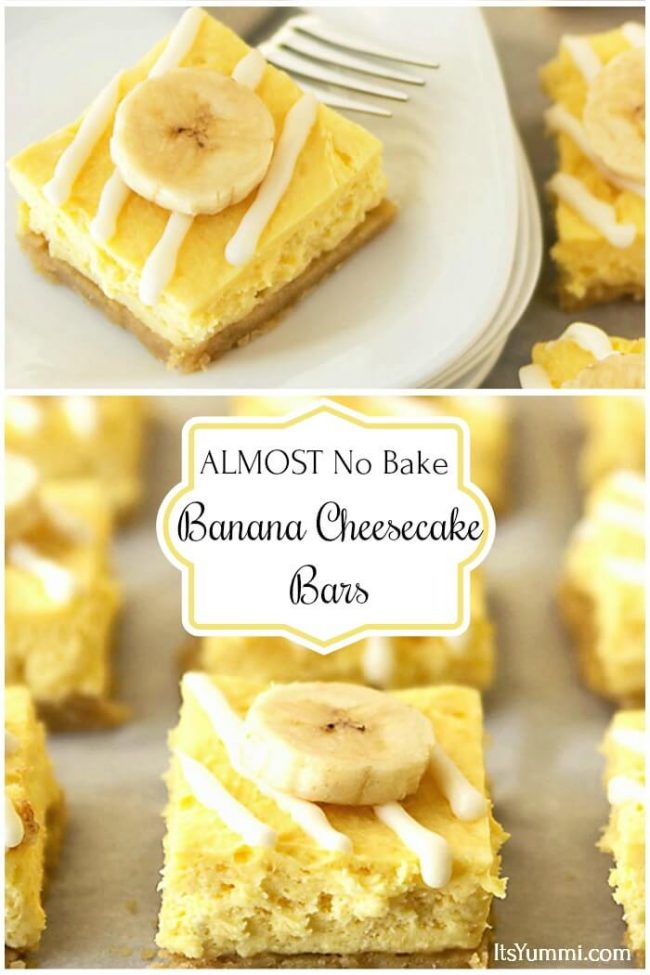 Banana cheesecake bars with white chocolate drizzle are delicious, and such an easy dessert recipe! This is an ALMOST no-bake dessert recipe (just the crust is baked). 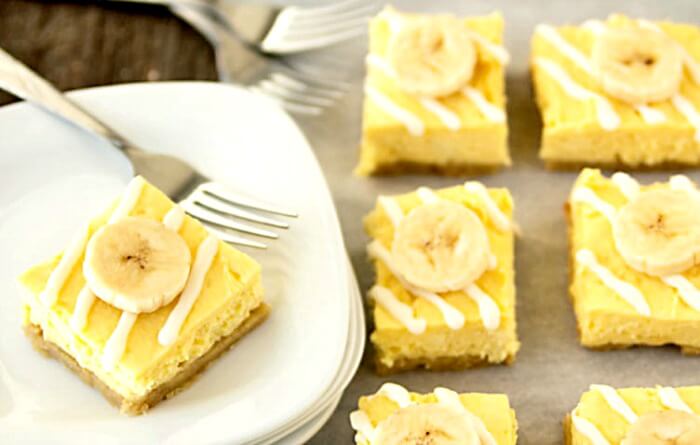 Whenever I see homemade southern banana pudding, my thoughts instantly gravitate to a childhood friend of mine, Paula. Or rather, her grandmother.

In her grandmother’s kitchen, there was almost always a batch of creamy banana pudding waiting to be devoured. Creamy, delicious homemade banana pudding!

Jump forward in time to the year I fell in love with cheesecake. Truthfully, obsession is the best term to describe my affection for cheesecake. I’ve requested it as my birthday dessert nearly every year, for as far back as I can remember. 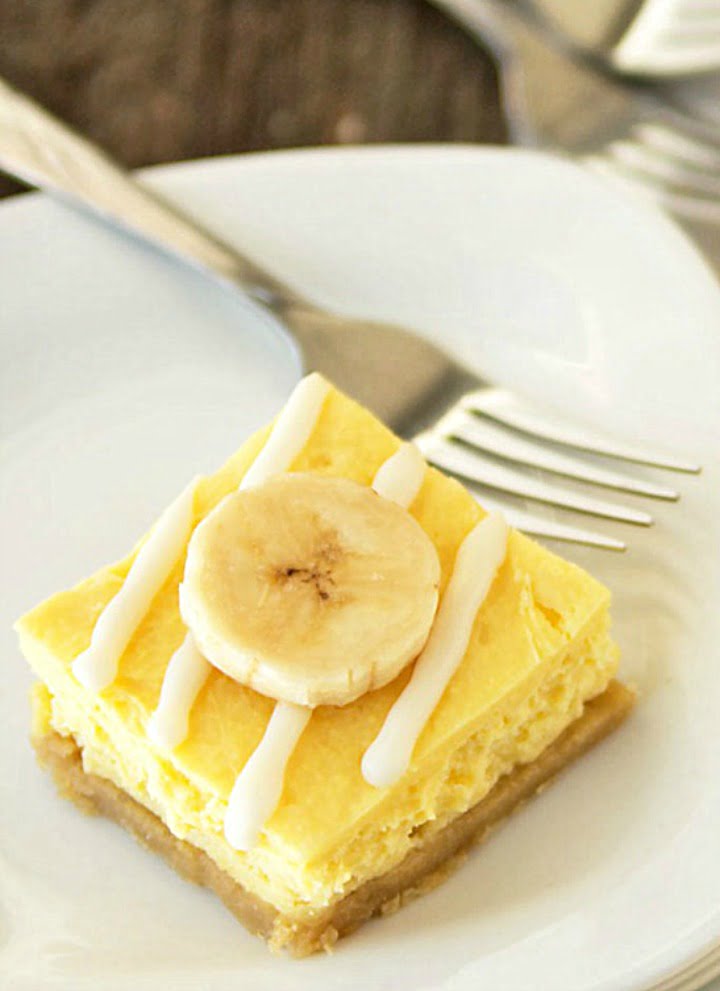 Later on in my life, I learned that no-bake cheesecake was a thing. Not just any old thing, either! No bake cheesecakes are delicious, AND much less expensive and easier to make than traditional cheesecake.

So when it came time to create this dessert recipe, I brought my two dessert loves together into dessert marriage.

Banana cheesecake bars are the perfect dessert, combining my passions for banana pudding and cheesecake. 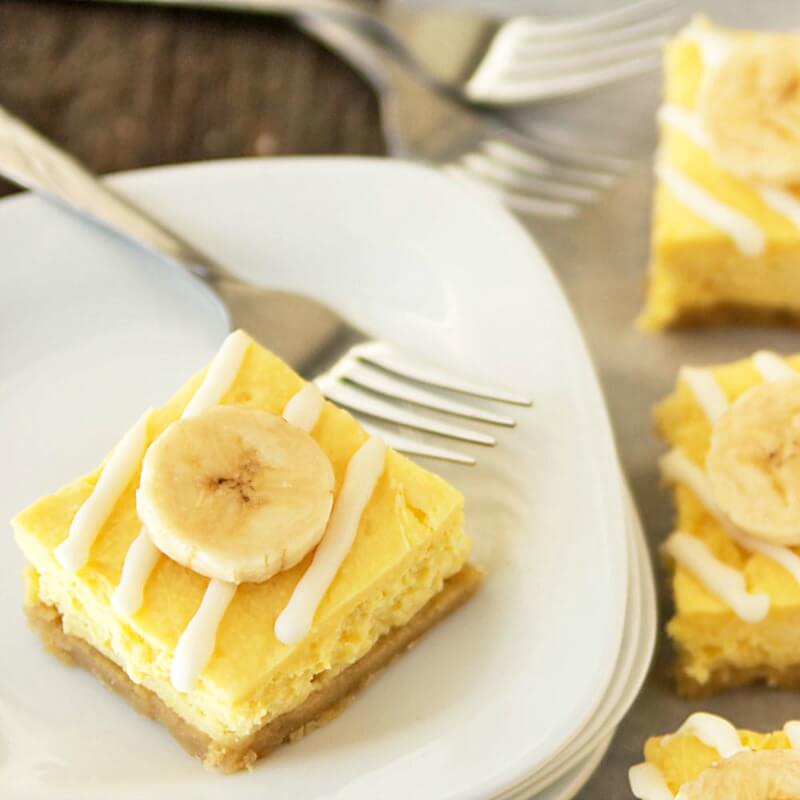 Making the banana cheesecake bars is beyond easy, not to mention, quick! Waiting for them to chill in the fridge is the most difficult part.

The combination of bananas and brown sugar makes the banana cheesecake bars rich, but because there isn’t a lot of sugar in the recipe, they’re not overly sweet. You can use either traditional banana cheesecake pudding mix or sugar free. With sugar free pudding in my pantry, and 50 excess pounds to lose, sugar free is the obvious choice for me.

Sorry for the tangent… my love for banana desserts is long and strong! 🙂

So back to my banana cheesecake bars… a drizzle of white chocolate and sliced bananas on top of them, and you’ve got a dessert that’s as pretty as a picture.

And pretty desserts are a great thing, since we eat with our eyes first. 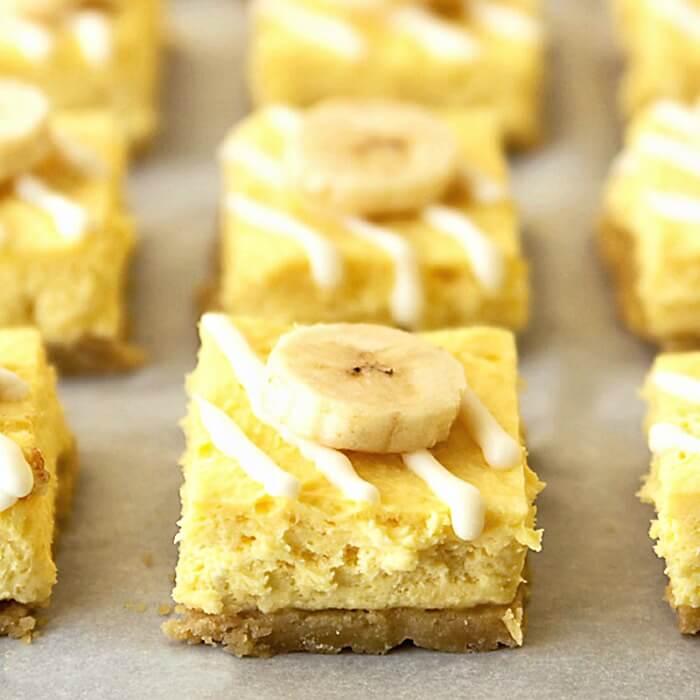 Also, after you make the almost no bake banana cheesecake bars, I would very much appreciate it if you would please come back to rate the recipe and leave a comment letting us know what you think of it. It helps other readers when they can see how well a recipe has turned out for other people. Thank you!

How to Make Banana Cheesecake Bars with White Chocolate Drizzle 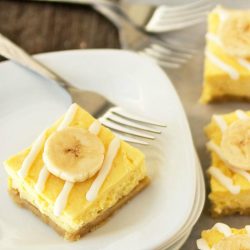 For the Blondie Crust:

For the No Bake Cheesecake Filling:

For the White Chocolate Drizzle

For the Blondie Crust:

For the Cheesecake Filling: 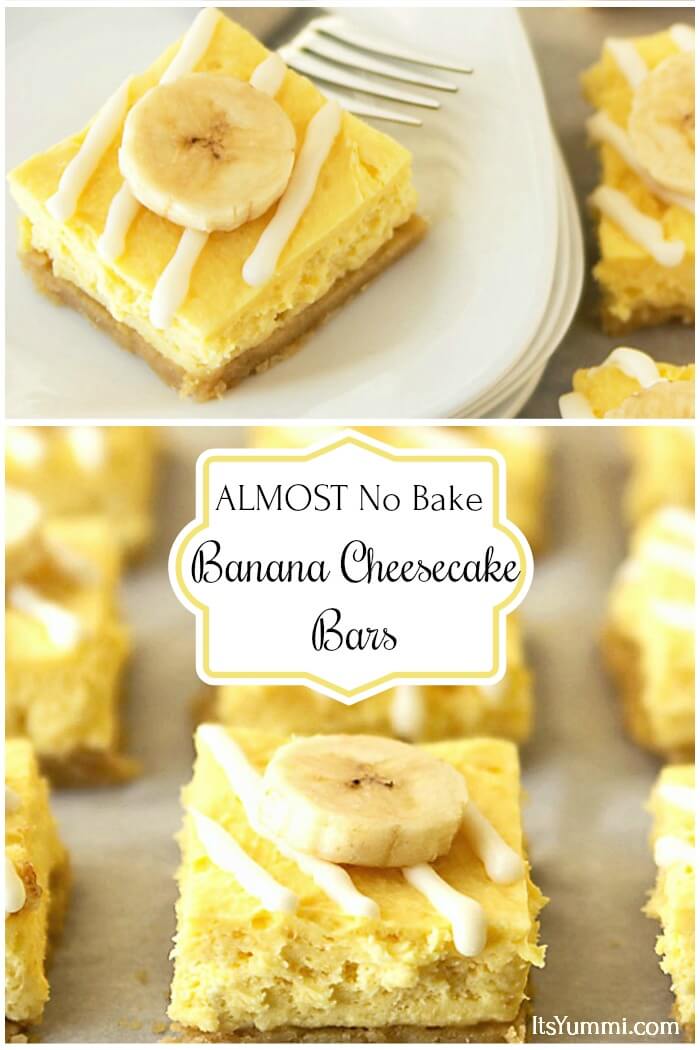