Read my review of the Skinny Dinners cookbook here

If you’ve been around this blog for a while, you know how much I adore healthier desserts. But when I’m trying to keep the calorie count down, I don’t want a dense piece of cardboard-like cake. I need something that’ll make me feel like I’m indulging and being a little bit naughty.  This banana split cake fits that bill.  Perfectly, I might add.

How can you possibly go wrong with a light vanilla sponge cake that’s been filled with fluffy, sugar-free whipped cream, sugar-free vanilla pudding, and sliced fresh fruit, then rolled up and drizzled with chocolate ganache? 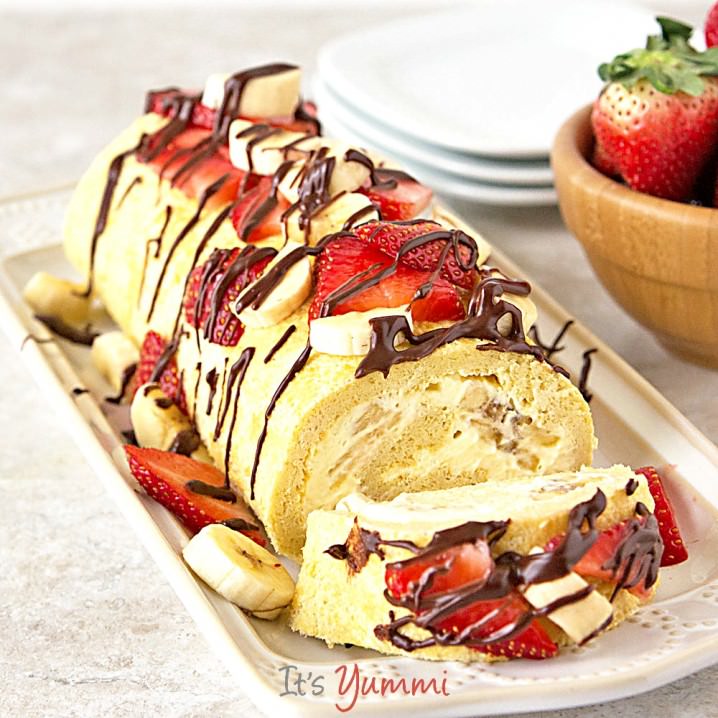 I remember feeling a similar euphoria when I made low carb raspberry cheesecake bites over the summer.  Any time I can have the taste of a fully loaded dessert without standing on the scale in terror and tears the next day, I’m a happy girl.

I’ve always been a fan of the Better Homes and Gardens cookbooks, but admittedly, I usually have to add a little bit of “this or that” to make the recipe really shine.  Usually, but not always.  This is one of those “skinny” cake recipes that needed no tweaking whatsoever!

The only substitutions to the banana split cake roll recipe that I made were minor, and they were only made because I’m trying to avoid the use of processed ingredients if I can help it. 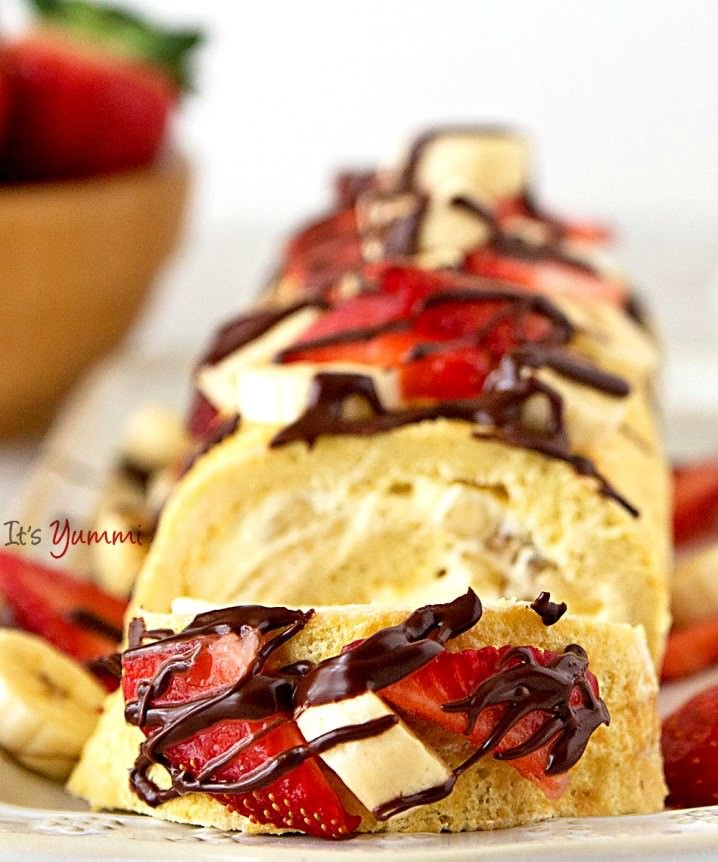 ** I made a batch of fresh, sugar-free whipped cream instead of using processed sugar-free whipped topping.  Making your own whipped cream is as simple as placing very cold heavy whipping cream into a very cold mixing bowl and whipping it with an electric mixer on high speed until heavy, stiff peaks form. It takes about 2 minutes or so.  To help the cream whip up, I place it into a stainless steel mixing bowl and toss the whole thing in the freezer for a couple of minutes before whipping.

** I used a non-GMO, low glycemic sugar substitute (Erythritol) instead of the granulated sugar called for in the recipe.  Not only does that remove a few more calories in the recipe, it also makes this dessert safer for people with blood sugar issues. *NOTE: This recipe still has natural sugars in it, and there are other sugar substitutes in the pudding mix that aren’t low glycemic, so if you have a condition such as diabetes, please know that you’ll need to follow your doctor’s orders for eating lightened up cake recipes like this one.

I really say enough good things about Erythritol, though.  It doesn’t have an after taste like some other artificial sugars do, it’s not nearly as expensive as some of the sweeteners out there, and it caramelizes (browns), so when I bake with it, my muffins and cookies get that nice golden color that they’re supposed to get. 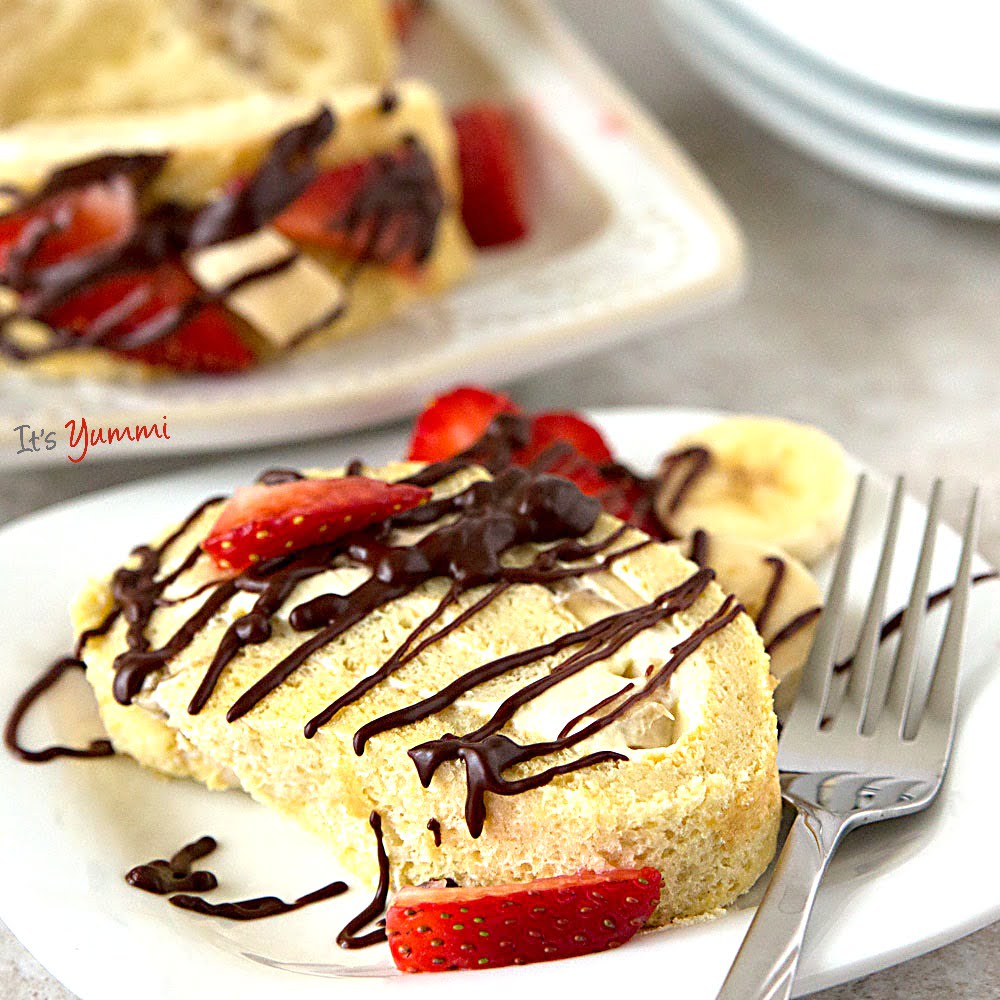 If you love this banana split cake roll recipe and want to try another lightened up banana dessert, be sure to also check out my recipe for caramelized banana skillet cake! 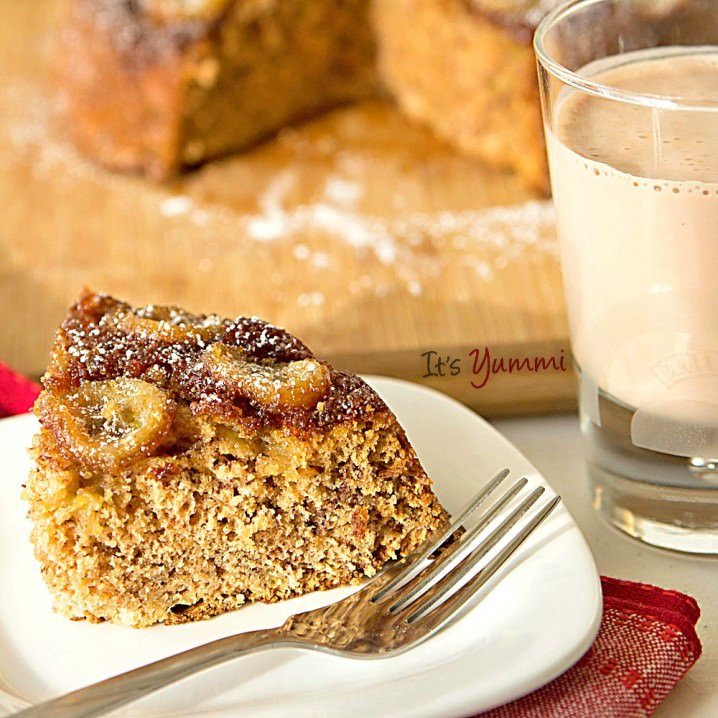 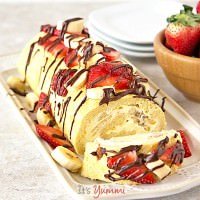 This banana split cake roll recipe was reproduced with permission from Better Homes and Gardens via their publisher, Houghton-Mifflin Harcourt. I was provided with a free copy of the cookbook for review purposes, but I was under no obligation to create this recipe or to post about the book. 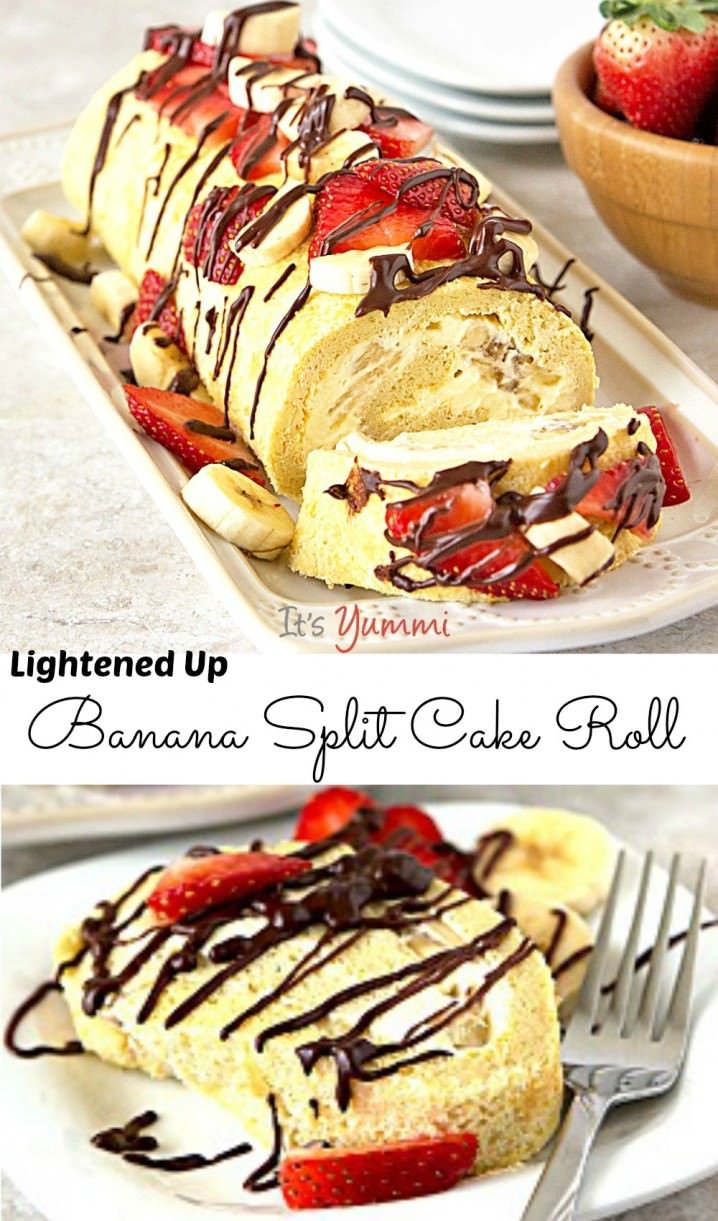