A caramel apple galette starts with flaky, buttery pastry crust that’s tucked around a filling of sweet, juicy cinnamon spiced apples. The filling is topped with chocolate caramels and crumbly streusel to create one of the best apple recipes you can make for the fall apple picking season.

Welcome apple lovers!  Step into my virtual kitchen and let me show you how to make the flakiest, juiciest, most delicious caramel apple galette that your lips will ever touch!  Sound too good to be true?  Give it a try and see if you shout “It’s yummi!” 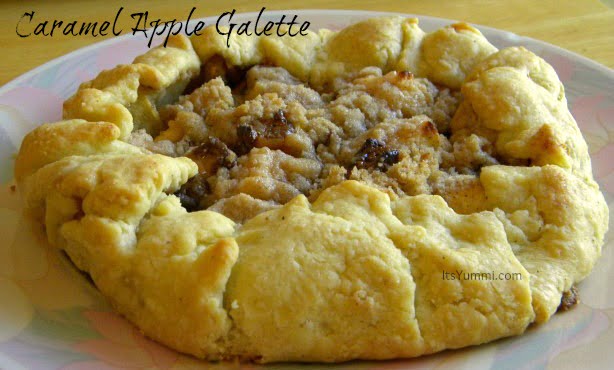 What is a Galette?

Have you ever noticed that there are many ways to describe the same thing?  Similar to how tissues are also called snot rags (yes, it’s gross, but it’s true!), this caramel apple galette could also be called a caramel apple crostada, or even a crostata.

Joy the Baker calls them crostadas.  I have another food blogger friend who argued with me for 10 minutes about how they’re crostaTAs, and then I just got frustrated and had to Google the correct spelling. That’s when I learned that they can also be called galettes.

“Galette” is a French term, meaning “flat, round, or freeform dessert of pastry or bread.”

Unless, of course, you’re referring to a Breton galette, which is actually a type of buckwheat pancake with a savory filling.

Potato, potatah… oh geez, let’s call the whole thing off.  As long as it’s eaten and enjoyed, I don’t think it matters one iota what they’re called.  Let’s just call this caramel apple galette a yummi dessert and leave it at that.

Do you love pastry desserts? If so, be sure to check out my recipes for Nutty Banana Chocolate Hand Pies and Cherry Pie Cookies . 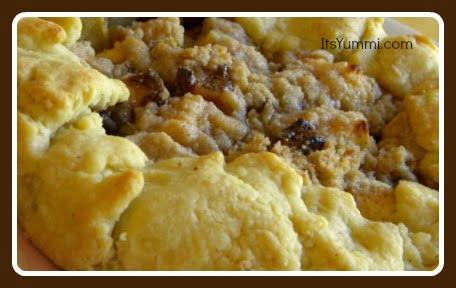 NOTE:  This  caramel apple galette recipe looks REALLY long.  Don’t let it intimidate you.It’s only detailed because I make my own pastry dough.  You can easily omit that step and use refrigerated pie crust if you want to.  Easy peasy! 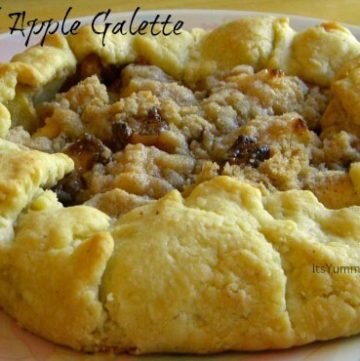